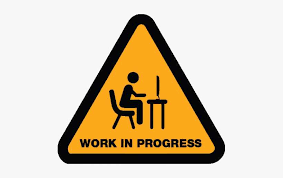 Figure 6.1: This section is a work in progress

The following chapter is an investigation into the quantum version of the classical perceptron algorithm, and is based on the previous works of (Kapoor, Wiebe, and Svore 2016)

The perceptron is a machine learning algorithm that can be thought of as the most basic fundamental building block of more complex artificial neural networks (ANNs), or alternatively as a very simple form of neural network in and of itself.

The perceptron is a linear classifier used for binary predictions: its goal is to classify incoming data in one of two given categories. Like in any supervised learning tasks, the classifier is trained using a dataset of couples data points-labels and its goal is to generalize to previously unseen data points.

Unlike more complex learners, the textbook perceptron can only deal with linearly separable datasets. A dataset is said to be linearly separable if there exists at least one hyperplane that can successfully separate the elements of the dataset into distinct groups.

Two sets, \(\mathrm{A}\) and \(\mathrm{B}\), in an \(n-\)space are linearly separable only if there exists an \((n-1)\) hyperplane that shatters the two sets. In a 2-dimension space, the hyperplane is a line. In a 3D space it is a plane, and so on. (Note that in 2D, for instance, it could not be a curve! The linearity of this classifier make it so that you can only shatter the sets using hyperplanes. One could overcome this limitation by introducing kernels in the perceptron formulation or by projecting the data in a space, via “feature engineering”, so that they are linearly separable in the new space.)

We will soon focus on how the perceptron learns the weights \(w_{i}\) and \(b\). However, assume for a while that the perceptron knows these numbers (i.e., it has been trained) and only needs to use them to classify the incoming data points in one of the two classes.

In other words, given a data point \(x\) and the weights \(w\), the perceptron classifies the point in the following way:

The hyperplane identified by the weigths \(w\) is also called decision boundary as, using the sign activation function, the position of the data points w.r.t. it determines the output class.

In this book, we focus only on the online training algorithm, as this is handy for our quantum algorithms. We invite the interested reader to read more about the batch training.

The perceptron, like we should do, learns from its own errors but it also need somewhere to start from. Its training process happens in the following way. We initiate the perceptron with some random weights, feed it with many training couples data point-label, and let it shot its guess for each point. If the guess is correct, nothing happens. If the guess is wrong, the weights need to be updated.

If a classification error is detected, the weights get modified by an amount that is proportional to the input \(x^{(i)}\). This process continues for a certain number of iterations, known as “epochs.” In the online learning regime, which is the one we investigate in this chapter, the update to the weight and bias vectors occurs for each and every misclassified data point iteratively throughout every epoch. During an epoch, each training data point is considered once. The training ends when there are no misclassified points in one epoch. We remind the reader that the training goal is to determine the weights that produce a linear decision boundary that correctly classifies the predictions.

The following pseudocode highlights the structure of the perceptron algorithm and identifies at which step in the processing schedule the error calculation and subsequent parametric updates occur. 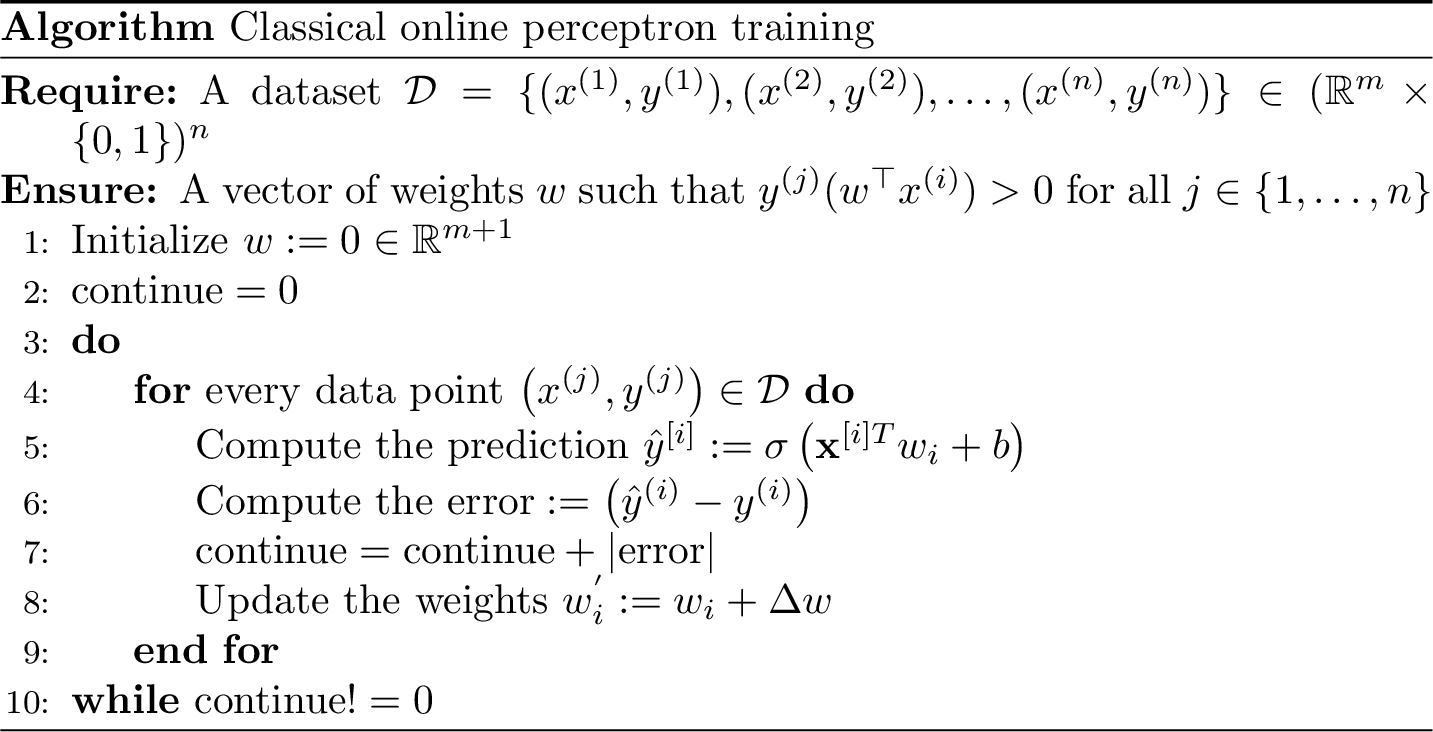 To sum up in an overall picture, the perceptron iteratively updates the linear boundary function (i.e., the hyperplane equation) that acts as the classifying condition between the two classes of the data, until no errors are detected and the algorithm converges. The training happens by minimizing the error on the training data set provided to the algorithm. Ultimately the identification of the weights allows for the distinction of data points belonging on one side of the boundary or the other.

Of course, if the data were not linearly separable, the training algorithm would run forever. The online training requires the existence of a margin between the two classes.

It naturally follows that a dataset is linearly separable if and only if its margin is different from \(0\).

Next, in order to construct our desired online quantum perceptron, we will need to have a mechanism with which to access the training data. We assume that the data is accessible via the following oracle \(U\).

Now, we can use the unitary \(\mathcal{F}_{w}\) as an oracle for Grover’s algorithm (see Section 5.2). This allows for a quadratic reduction in the number of times that the training vectors need to be accessed by the classification function.

The following pseudocode sums up the online quantum perceptron algorithm.

This algorithm gives birth to the following theorem, which formalizes the quadratic speedup.

Note that if the training data is supplied as a stream (as in the standard online model), then the upper bound for the classical model changes to \(n_{\text {class}} \in O\left(n / \gamma^{2}\right)\) because all \(n\) training vectors can be deterministically checked to see if they are correctly classified by the perceptron. A quantum advantage is therefore obtained if \(n \gg \log ^{2}\left(1 / \epsilon \gamma^{2}\right)\). (see (Kapoor, Wiebe, and Svore 2016) for a better explaination.)

Theorem 6.1 can easily be proved using Grover’s theorem (with exponential search, since we do not know the exact number of answers to the search problem. i.e., multiple data points can be misclassified) and two lemmas.

Lemma 6.2 Assuming that the training vectors \(\{x^{(1)}, \ldots, x^{(n)}\}\) are unit vectors and that they are drawn from two classes separated by a maryin of \(\gamma\) in feature space, the online quantum perceptron algorithm will either update the perceptron weights, or conclude that the current model provides a separating hyperplane between the two classes, using a number of queries to \(f_{w}\) that is bounded above by \(O\left(\sqrt{n} \log \left(1 / \epsilon \gamma^{2}\right)\right)\) with probability of failure at most \(\epsilon \gamma^{2}\).

The interested reader is encouraged consult the appendix of (Kapoor, Wiebe, and Svore 2016) for proofs of those lemmas. Furthermore, Novikoff’s theorem states that the \(1/\gamma^2\) is an upper bound in the number of times the algorithms described in these lemmas need to be applied, which is the reason for the first line of the algorithm and the \(1/\gamma^2\) term in the runtime.

Theorem 6.2 Given a training set with margin \(\gamma\), a weight vector \(w\) sampled from a spherical gaussian distribution \(\mathcal{N}(0,1)\) perfectly separates the data with probability \(\Theta(\gamma)\).

Like in the previous case, to use Grover, we need one unitary \(U\) that creates the weight vectors among which we search and one oracle \(\mathcal{F}\) that modifies the phase of the correct weight vectors.

Once we have the oracles \(U\) and \(\mathcal{F}\), we can sum up the algorithm in pseudocode. 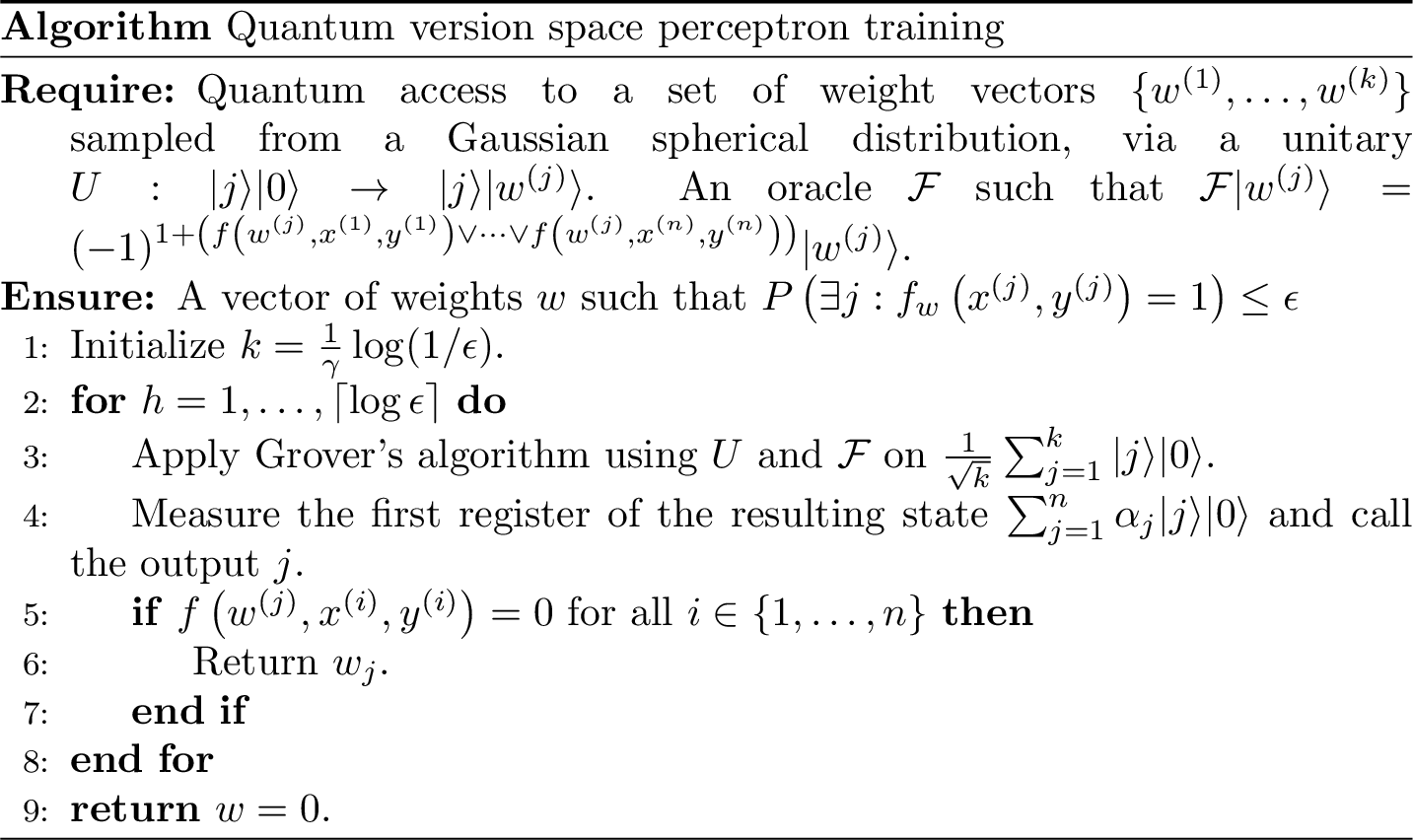 The following theorem formalizes the runtime of the algorithm.

The proof of this theorem is straightforward from the statement of Grover’s algorithm and some statistics to bound the failure probability.