You can feel the power of Monte Carlo!! All of the above does not depend on the dimension of the sample space of the random variables \(X_i\), but just on the number of repetitions \(N\) and on the variance \(\sigma^2\).

Now we highlight the main flaw of the Monte Carlo procedure: to get high precision with high confidence, you need a big number of samples. We saw that estimating \(\mu\) up to additive error \(\epsilon\) with \(99\%\) success probability requires \(n = O(\sigma^2/\epsilon^2)\) repetitions, independently on the dimension of the sample space. This is remarkable but not so efficient. It means that if we want to maintain the confidence at \(99\%\) and we want to decrease the additive error \(\epsilon\) by a factor of \(10\) we need to increase the number of iteration by a factor of \(10^2\). Imagine if we want to estimate \(\mu\) up to four digits. We would need to run \(A\) more than \(100\) million times (Montanaro 2015).

Here is where quantum computing comes to help. The number of uses of \(A\) can be reduced almost quadratically beyond the classical bound (Montanaro 2015). The result is based on amplitude estimation.

We first show the quadratic advantage for an algorithm \(A\) whose output is bounded between 0 and 1. This speedup will be smartly used to speedup more general classes of algorithms. This section is also meant to give insights on why quantum speedup happens in the first place.

That is to say the random variable \(\nu(A)\) is distributed according to the probabilities \(p_x = |\alpha_x|^2\). We will see that with quantum computers, there is a smarter way to estimate \(\mathbb{E}[\nu(A)]\), instead of repeatedly sampling from \(A\)? Using a quantum computer we can assume that \(A\) is now a quantum algorithm (by taking the classical circuit, making it reversible, and then obtaining a quantum circuit for it). Then, we can use various tricks to encode the value of \(\nu(A)\) in the amplitude of a quantum register, and then estimate it using amplitude estimation.

This is a controlled operation which in general requires to first encode \(\Phi(x)\) in the \(|x\rangle\) register. This is done by performing \(k\) subsequent controlled rotations for some specific angle on the \(k+1\)th qubit for each of the \(k\) controlling qubits. Then it is easy to rotate back the \(k\) register to \(|x\rangle\) (more on this can be found in (Duan et al. 2020)).

When the sum over \(x\) is developed, it turns out that \(|\psi\rangle\) is such that it can be viewed as a superposition of two orthogonal states. A “good” state, \(|\Psi_G\rangle\) which is a superposition of all the states in the expansion whose qubit sequence ends up with a \(1\) (i.e. the ancilla qubit is in state \(|1\rangle\) and a “bad” state \(|\Psi_B\rangle\), which is a superposition of all the other states. Unfortunately there is no ugly state, otherwise we would have been screening a spaghetti western cult. The good and bad states are orthogonal to each other and thus they can be viewed as spanning two orthogonal sub-spaces in the Hilbert space, which without fantasy we’ll call good and bad sub-spaces.

Projecting \(|\psi\rangle\) onto the good subspace is equivalent to find the amplitude of the good state, which for construction is the expected value of \(\nu(A)\) (exaclty what we wanted!!). Indeed calling \(P\) the projector onto the good subspace, which is in our case \(P= I \otimes |1\rangle\langle 1|\), we have that: \[\langle \psi|P|\psi\rangle = \sum_x |\alpha_x|^2\Phi(x) =\mathbb{E}[\nu(A)]\,.\] Notice that the bound on the output of \(A\) between \(0\) and \(1\) and the form of the operation \(W\) leads to a normalized state \(|\psi\rangle\). This means that we can write: \[ |\psi\rangle = \sin{\theta}|\Psi_G\rangle + \cos{\theta}|\Psi_B\rangle\] for some angle \(\theta\). We can restate our problem as follows: we want to estimate the amplitude squared of the good state, i.e. \(\sin^2(\theta)\). Indeed we created a circuit that create a state where the expected value of \(\nu(A)\) is now encoded in that amplitude of the quantum state, more specifically it is encoded in the probability of measuring \(1\) in an ancilla qubit. The latter is estimated with amplitude estimation, see theorem 4.4. This algorithm actually returns an estimate of the angle \(\theta\) for which we can derive an estimate of \(\sin^2(\theta)\), which in turns return the expectation of the random variable \(\mathbb{E}[\nu(A)]\).

Let’s recap how to use this algorithm. Amplitude estimation takes as input a unitary operator on \(n+1\) qubits such that: \[|\psi\rangle = \sqrt{1-a}|\Psi_B\rangle|0\rangle + \sqrt{a}|\Psi_G\rangle|1\rangle\] The final qubit acts as a label to distinguish good states from bad states. 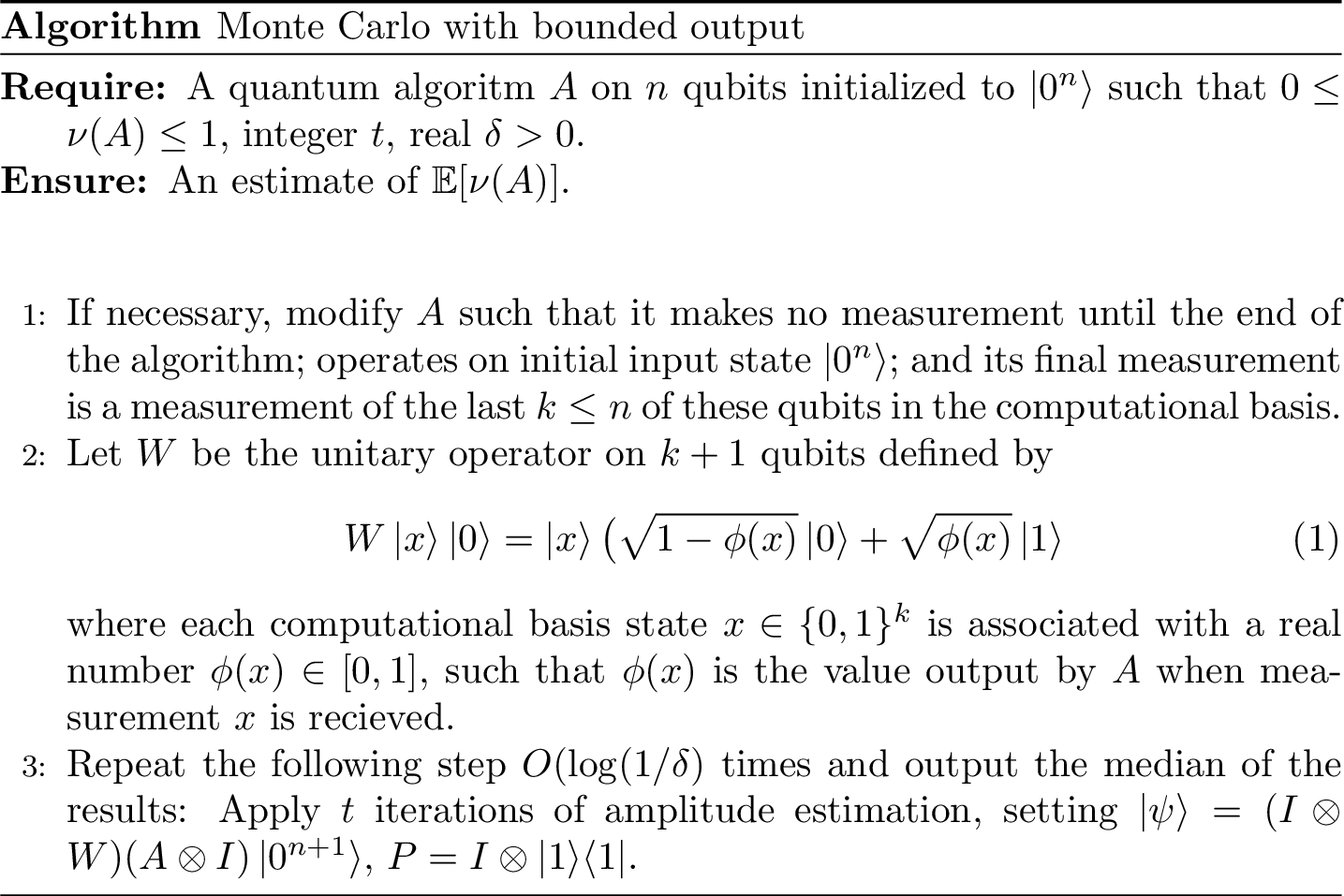 Figure 6.1: Quantum algorithm for Monte Carlo (bounded variables). A makes no measurement until the end of the algorithm and its final measurement is a measurement of the last k qubits in the computational basis.

Applying amplitude estimation together with the powering lemma C.1, one can prove the following theorem valid for algorithm 6.1.

We already described the main idea to get quantum speedup: encode the expected value of \(\nu(A)\) in a suitably defined amplitude of the quantum register and then estimate it. The error bound of theorem 6.1 is the error bound of the amplitude estimation algorithm 4.4. The same applies to the success probability which, in this 4.4 formulation of the amplitude estimation theorem, is \(8/\pi^2\). This can be improved to \(1-\delta\) with the powering lemma C.1. That is why, for example, \(U\) is used \(O(t\log(1/\delta))\) times: \(t\) times by amplitude estimation which is repeated \(\log(1/\delta)\) to apply the powering lemma. To get the absolute error to \(\epsilon\) we just need to set \(t=O(1/\epsilon)\), and to obtain a relative error we set \(t=O(1/(\epsilon\sqrt{\mathbb{E}[\nu(A)]}))\).

The algorithm described by theorem 6.1 is remarkable, but it is limited by the requirement of having an output value bounded between \(0\) and \(1\). We want more. We want a quantum algorithm to compute the expected value of any (as we will see, we will have anyway some restrictions) random variable.

We can now state the second quantum algorithm which estimates the mean value of \(\nu(A)\) with bounded \(\ell_2\) norm.

We are ready to demonstrate quantum speedup for the most general case: algorithms whose random output have bounded variance. In this case one obtains quantum speedup combining the classical Chebyeshev inequality and the use of quantum speedup of algorithm 6.2. For clarity, we recall that the bound on the variance of \(\nu(A)\) means that \(Var(\nu(A))= \mathbb{E}[\left(\nu(A)-\mathbb{E}[\nu(A)]\right)^2]\leq \sigma^2\).

The first step of our algorithm is to run the algorithm \(A'=A/\sigma\) obtained by scaling \(A\) with \(\lambda = 1/\sigma\). For what we said above \(\nu(A')\) will be a random variable with mean and standard deviation bounded by \(\mu' \leq \mu/\sigma\) and \(\sigma' \leq 1\) respectively. Having a standard deviation of order unity means that the output \(\widetilde{m}\) of a run of algorithm \(A'\) is with high probability pretty close to the actual mean \(\mu'\). This is because of Chebyeshev inequality, i.e. theorem C.4: 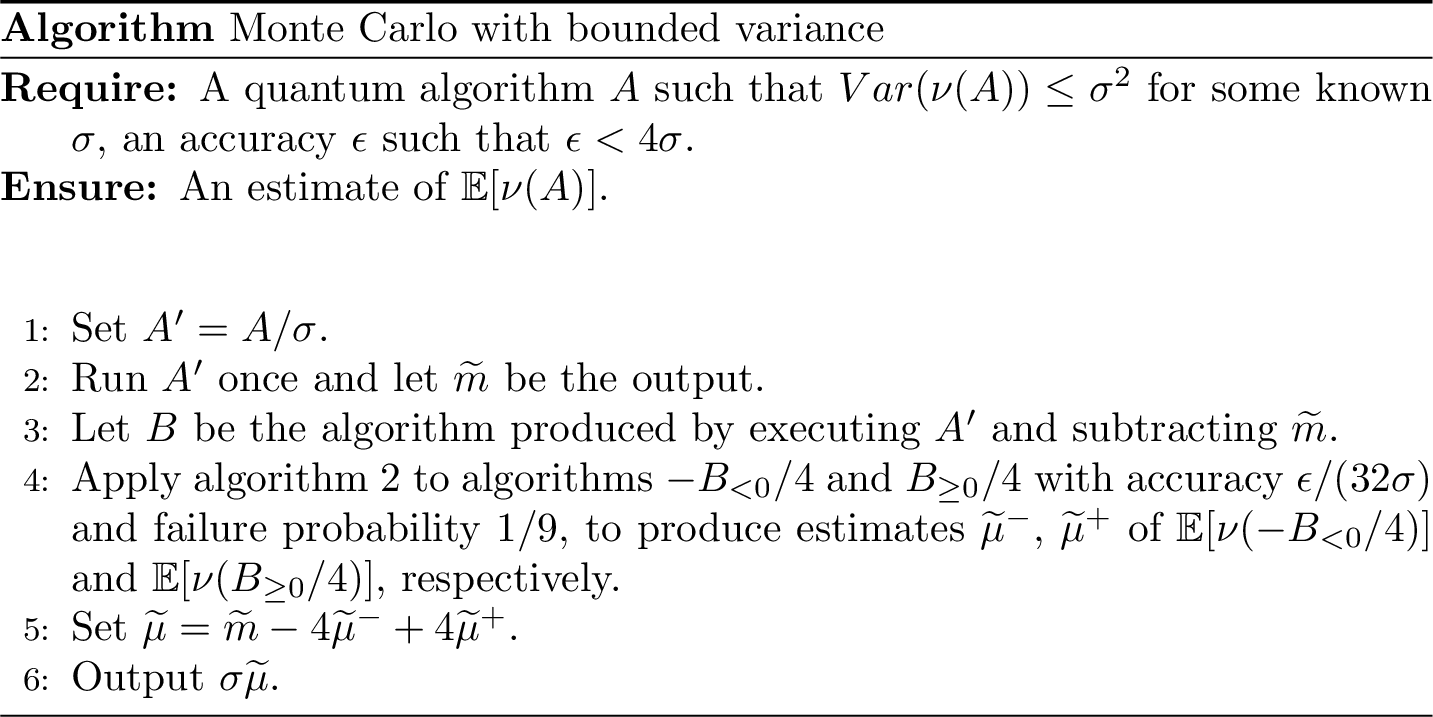